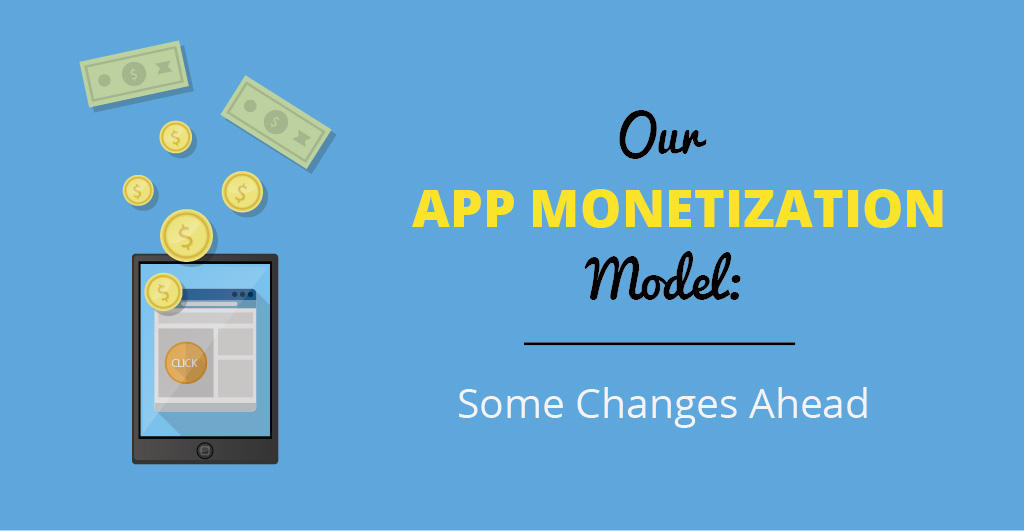 Now that TimeTune is approaching half a million downloads (yay!) it’s time to evaluate how things have evolved in the app monetization department and what can be improved about it. We’ll let you take a peek into our strategy and conversion numbers so you can better understand how things work on the inside.

We’ll show you as well some changes we’ve planned for the future which can improve the user experience while producing better results for us. Ready?

THE AD STRATEGY: HOW WELL DOES IT CONVERT?

As you may know, since we first published TimeTune on Google Play (October 2014) our app monetization model has been based on advertising. The free version of the app shows ads while the pro version doesn’t. And that’s the only difference between the two versions.

At this moment, the conversion rate from the free version to the pro version is around 2.5%. This is a bit low for a productivity app (a good rate would be a 4% or more), but it was expected. Why? Because users only pay to eliminate the advertising and no other benefits are included in the pro version. Therefore, many people stick with the free version.

The conversion rate shouldn’t matter too much if the global result (ad revenue + conversion to pro revenue) were right. Until mid-2015, the result was split 50/50 between the two revenues, and this was OK with us. But the user base was still too small to know for sure if this would remain untouched. Now, as downloads have increased and the user base has grown, we’ve discovered a very different truth: the ad revenue is just half of the conversion revenue. And the difference gets bigger as we speak.

This has a somewhat unsettling consequence: we’re annoying 97.5% of our user base with ads just to achieve half of the revenue the other 2.5% produce. This doesn’t feel right.

Are this numbers and this model viable in the long run? Only if we could achieve millions of active users. But we don’t know if this will be our case.

WE CAN DO BETTER: LESS ADS, MORE PRO

How can we improve the results while making the experience better for our users? The first step would be making a transition into a hybrid model. This means showing less ads on the free version and giving more value to the pro version by adding new features for pro users. This should increase the conversion rate to pro, making the overall revenue a bit better.

There’s another reason for going hybrid: some future features will have to be on the pro version necessarily. For example, one of the things we’re planning to add is cloud and device synchronization. But the cloud storage will not be free for us, so if we opened this option to all users we would have to close up shop immediately. Only big companies (with big money!) can afford this.

For the moment, we can’t get rid of all the ads all at once simply because we don’t have enough pro features in store. The best approach would be to progressively add new features to the pro version while decreasing the amount of advertising in the free version. But in the end…

WE CAN DO EVEN BETTER: NO ADS!

Let’s face it: nobody likes seeing ads in their apps. While some people don’t care, a lot of people do. If you are a developer and you are thinking about adding ads to your productivity app (games are a whole different world), here are some points to take into account:

If we take a look at the big productivity players in the market (Evernote, Dropbox, Any.Do…) we’ll see that none of them use advertising (they may promote their products, but they don’t show banners or interstitials for external products). They just have a free version with many features and a pro version with extra features. This is our ultimate goal.

One of the reasons for including ads in TimeTune since the beginning was to offer all features for free so that students and people in general could enjoy the app in its maximum potential without spending any money. But as the app evolves and the model starts showing its weaknesses, transitioning into a hybrid model and ultimately into an ad-free model is a must.

But there’s no need to worry! Our goal is to do the same as the big players do: offer a free version so complete that will cover the needs of the vast majority of users and a pro version with extra features only pro users will need. We’re not planning on making a key feature only pro. The app should remain perfectly usable in its free form.

And of course we’re not going to take any of the current free features and make them pro (this would be a very bad bad move!). On the contrary, some initial pro features could be liberated to free if the model allows it.

How long will the transition take in our app? Will we finally achieve it? Only time will tell, as we don’t know the surprises we may find on the road. We’ll keep you posted about it, but if at any time you think we’re going the wrong direction you can tell us right away, our door is always open! 😉

What are your thoughts about app monetization? Do you think there are other alternatives? Let us know your opinion down below or tell us if you want to know more details about TimeTune. We’d like to help in all we can!