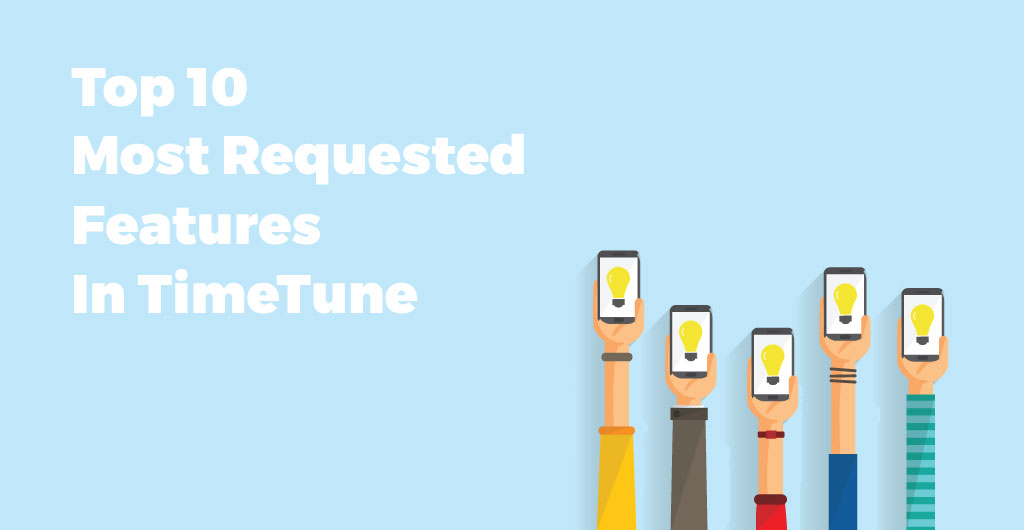 One of the things we’re really grateful for in TimeTune is your feedback. Since the beginning, our digital door has been open to your ideas and suggestions. Many current features originated from user requests and now you can help shape the future of TimeTune too.

Here’s the list of our top 10 most requested features, with our impressions and opinion. Some of them are obvious, some are not. That’s why we’d like to know what you think about them. If you are interested in any of these features, please share your thoughts with us and help us clear the doubts.

At this moment there are 2,205 users who sent their suggestions through different channels (and we’re not counting the ones whose suggestions were already implemented!). So when you see the number of votes you’ll have an idea about the relative importance of each suggestion.

Many users asked for a way to track their activities so that they can check their effectiveness and update their routines accordingly. This would be a nice feature indeed to help you manage your time, but we’re evaluating different approaches:

This request is in fact a mixture of different requests, all related to Google Calendar:

Some users would like to see their TimeTune reminders in Google Calendar as ordinary events. But in this case, why not use the calendar directly? Why have the appointment in two places?

And others would like to see all their routine activities in Google Calendar. But if one of the main reasons for using TimeTune is decluttering your calendar, why filling it with activities again?

So if you’re interested in some level of calendar integration, how would you use it?

This is an obvious request. Many people have more than one device and they’d like to work from one or the other indistinctly. This one is a favorite, although we need to make many internal changes before we can add it.

This one is a bit controversial. While it would be nice to update your routines from your desktop, some users mistakenly expect more than this.

Some users would like TimeTune to behave in their desktops the same way it does on their phones (pop-up windows, sound, text-to-speech and more) but unfortunately this is not really doable from a web application (it should be a standalone installable software).

Besides, there are other concerns:

If we agree it’s not possible to have the same functionality on your desktop, does it have any sense to make a browser version?

Creating a web version implies an important effort and investment and very likely the use of web servers and maintenance. This would probably end up requiring a subscription model. Would you be willing to switch to a subscription model just for this?

As we detailed in our introduction to TimeTune 2.0, some users would like to transform TimeTune into a full to-do app. They see that with certain modifications it could solve their task management needs.

But remember that TimeTune is all about time management and not task management. That’s why we have our reservations here. The suggestion hasn’t been discarded, but we’re not too enthusiastic about it (besides, there already exist many powerful to-do apps in Google Play).

What do you think?

This is another controversial one. TimeTune was never intended to substitute your calendar. While we think that some level of calendar integration would be helpful, going all in on the calendar route would just mean changing the meaning of the app.

And again, there already exist many beautiful and powerful calendar apps on the market. So why create another one?

With the latest addition of the Today section, TimeTune puts the focus on the immediate future and your activities for today and tomorrow. The idea is that if your routine has been properly planned, you only need to concentrate on what you need to do now and take immediate action.

But some users asked for a weekly view in order to see the whole week at a glance.

Sometimes we cannot follow our routines down to the minute. Unexpected events can throw our plans out the window. That’s why some users would like an option to delay the whole schedule on the fly in case of unexpected circumstances.

But would this really help with your productivity? Or maybe it would open the door to procrastination?

Most of the people live on a weekly schedule (5 days working/studying and 2 days resting). That’s why a weekly routine should be enough for almost everyone.

But some people asked for even longer routines and we think this comes from a misunderstanding on how TimeTune works. Some of them expected the app to behave like a calendar and asked for yearly routines. And others needed a monthly activity and wanted to create a monthly routine just for that (when the proper solution is to use a reminder).

Are we missing something here?

This is an obvious one as well. Some users switched to iPhone and would like to keep using TimeTune. This is something we’d love to do in the future, but it depends on how the project evolves.

For the moment, other things need to happen before this can be done:

So this request is more likely to happen in the long run.

Now’s your chance to tip the balance to one side or another! If you like any of these suggestions, tell us how you would use it and your reasoning behind it. And if there’s something we missed, let us know too!

Thank you very much and keep being so awesome! 😉