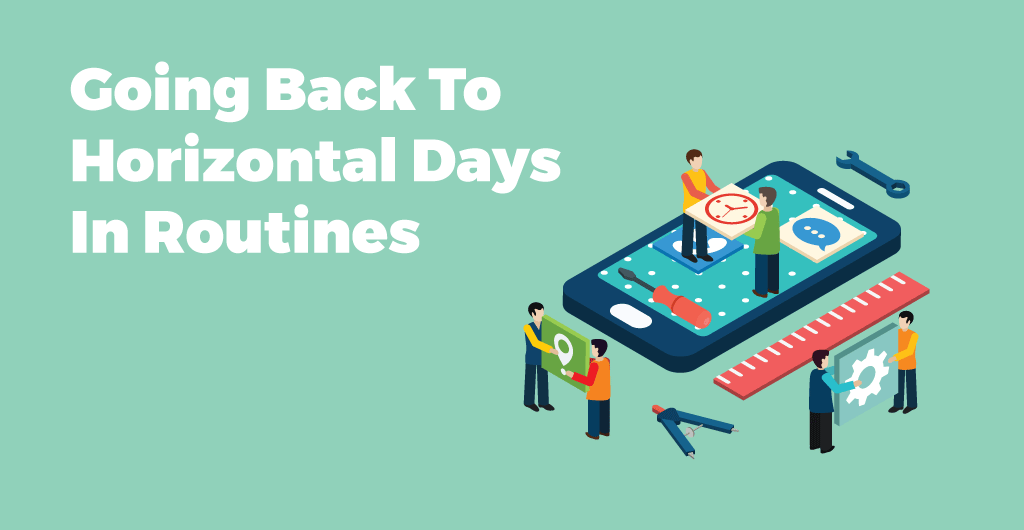 When we published TimeTune 2.5 last September, we made a mistake.

We switched from horizontal screens to show the days in routines to a single long vertical screen:

We truly believed in this change. The new vertical layout provided some nice features, like the ability to ‘swipe to delete’ activities, for example.

In our eyes the change was working as we expected, with a great acceptance and only a handful of complaints (which is normal with any application change).

However, these sporadic complaints kept popping up once and again. That’s when we decided to add a general survey in the app to get a definitive answer:

To our surprise, the result was totally different from what we believed. These are the results after more than 6,000 votes:

This percentage distribution has been stable since the first day and truly reveals what users prefer.

In light of these results, in TimeTune 2.6.1 we’ll go back to horizontal screens to show the days in your routine.

For those of you who prefer the vertical layout, don’t fret. The horizontal layout will be the base layout, but we’ll explore additional alternatives in future versions.

WHY DID THIS HAPPEN?

When we first published the change to the vertical layout in the beta channel back in September, we totally misread the beta feedback.

At that time, a few beta users complained, a few others welcomed the change, and the majority stayed silent.

We mistakenly presumed that the users who stayed silent were thinking “I’m OK with the change”, when in fact their silence was a synonym of resignation.

WHY DOESN’T THE VERTICAL LAYOUT WORK?

After close examination, we can see now that we were violating two important rules of a good UX (User Experience):

We are all used to see our days in horizontal screens in our calendars. There’s no reason to change this standard pattern without a very strong reason. Changing this pattern only complicates things for the user.

Cognitive load, related to UX design, can be defined as:

This means that the more information we put on a screen, the more effort a user needs to make to understand how the screen works and complete a task.

So basically, our vertical design was overwhelming users by showing too many things on the same screen.

We need to simplify things, not to complicate them 😅

WHAT DO WE LOSE?

By switching back to horizontal screens, we lose two features:

The ‘swipe to delete’ gesture was a cool feature, but not an essential one. The app already includes two other alternatives to delete activities: when editing them and when long-clicking on them.

The ability to keep swapping an activity to an adjacent day was nice as well. However, this use case is not very common and we can find an implementation alternative if necessary.

The layout in TimeTune 2.6.1 is cleaner and simpler, and it works as expected, using standard patterns.

(Top illustration by Macrovector, on Freepik)