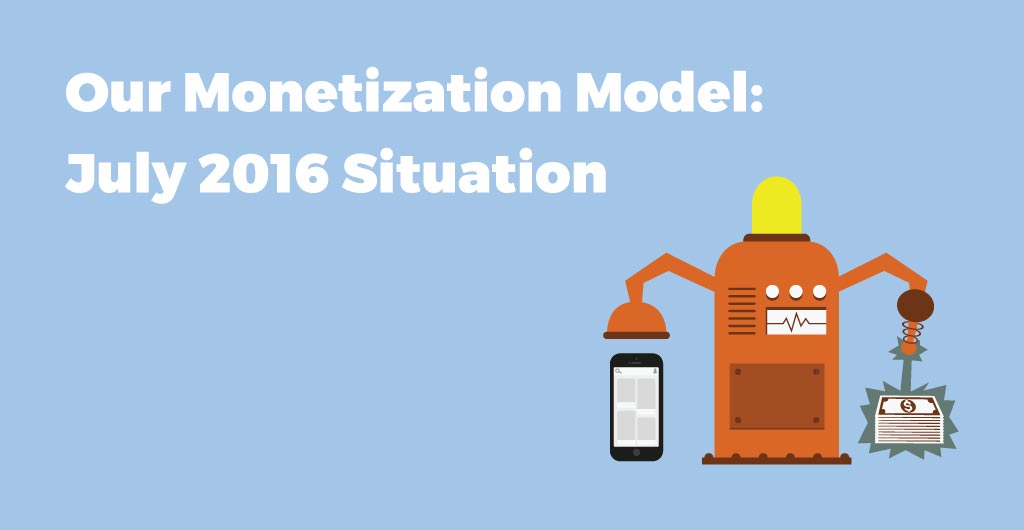 Almost five months ago we declared our intention to change our app monetization model, as we discovered our initial strategy was basically… wrong. This is a progress report on how the model has evolved since then, what changes we’ve made on TimeTune to make it happen and if we are getting closer to our final goal or not.

If you didn’t read that post from February, now it would be a good time. It shows where we come from and where we want to get in the monetization department.

The first thing we needed to do was to make a transition from a purely ad-based model into a hybrid model, or in other words, progressively decrease the amount of advertising while increasing the amount of Pro features. In theory, this should lead to better sales and a redistribution of our revenue sources (i.e. advertising revenue versus sales revenue).

To achieve this, we removed the ad banner from several screens: the Activity and Reminder Edit screens, the Help and Statistics screens and soon the Tags screen too. We added some brand new Pro features as well: Blue Themes and the Routine Programmer.

But it wasn’t until the addition of the Routine Programmer (a month ago) that we really started to see a notable difference in sales. As expected, users are more willing to pay for a Pro version if they see a benefit in power and functionality.

So we can successfully say the first step has been completed. TimeTune is now a hybrid model and it performs better than the ad-based model. To see how well it performs, we need to take a look at the conversion rate:

Previously on the ad-based model, we said our conversion rate from free to Pro was only 2.5%. It’s important to note that what we meant is 2.5% of all active users were Pro users at that moment. This is different from a dynamic conversion rate, which can be measured in different ways by tracking user conversions dynamically over different periods of time.

Where are we now with the hybrid model? The proportion has improved for the better, maybe not in a spectacular way, but good enough. At this moment, 3.48% of all active users are Pro users. And this happened even with a huge factor against us: the summer holiday season. Many businesses experience a decrease in global sales during this season, and TimeTune is not an exception (we’ll talk about it in another post).

But for those of you who are interested in our evolution, you must know that TimeTune is still at loss, meaning that we haven’t recovered yet all the work and effort put into it (and we presumably won’t for a long time). Developing apps (and software in general) is a long-distance race, especially if you start (like we did!) from scratch.

Nonetheless, the change in distribution means we are on the right path and the final goal (reaching an ad-free model) is achievable, but we can’t get rid of all the ads yet, as they still represent a good amount of the total revenue.

So in the coming versions you can expect a progressive advance in the same direction: less ads, more Pro features. The end of the summer holiday season will be an interesting period to follow too: we need to know how the (expected) uptick in downloads will affect the total conversion.

We think we’re going the right direction but, what do you think? Would you change anything else in the model? If you have any other ideas for the future of TimeTune you can tell us, we’ll take them all into consideration! 😉