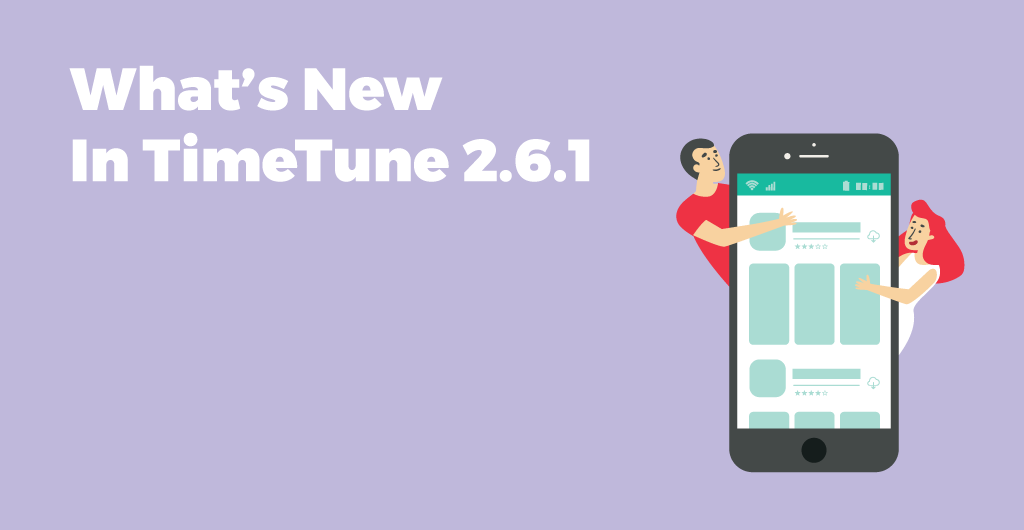 TimeTune 2.6.1 adds more improvements to the big redesign we made last month, when we introduced a cleaner and less noisy interface.

Although being a minor incremental version, this release brings with it two very important changes:

Let’s see more details about these two big changes, plus other smaller ones:

Up until version 2.4.4, we already used horizontal screens to show the days in routines (like in a calendar). However, we wanted to find a design with more capabilities. That’s when we switched to a single, long vertical screen in version 2.5.

And it was a mistake 😫

As our last in-app survey uncovered, 77% of users preferred to go back to horizontal days, 15% preferred the vertical layout and 8% didn’t have a preference.

Consequently, now in TimeTune 2.6.1 we’re going back to horizontal screens:

If you want to find why the mistake happened and what UX errors we made on the vertical layout, you can see all the details here.

Quick jump to another day

With horizontal screens there’s a small problem: when you want to see a day located on the other end of the routine, you need to do a lot of horizontal swipes.

To avoid this, just click on the day name in TimeTune 2.6.1 and a submenu will allow you to quickly jump to another day:

This is a change we didn’t want to make. Unfortunately, we had no other option 😥

Here’s the reason why:

Google will soon remove support for the Google Drive Android API (Application Programming Interface) that we used in TimeTune to make backups to the cloud.

Without this API, we (and all Android developers) have two options:

Therefore, our intention is to integrate Cloud Firestore in a future version, as recommended by Google.

So don’t panic. For the moment the app will only make local backups, but future versions will be able to synchronize to the cloud automatically.

In preparation for further upcoming restrictions imposed by Google on local storage, we changed the location where local backups are stored.

In TimeTune 2.6.1 local backups will be stored in the ‘Download’ folder instead of the previous ‘TimeTuneBackup’ dedicated folder. Certainly, this will help remove clutter from the folder structure in your device.

Transferring a local backup to another device

Now that we don’t have Google Drive backups, transferring your database to a different device will require a different approach:

Selecting a duration for a timer will be easier in TimeTune 2.6.1:

This is the same picker the app uses for routine notifications, but adapted for timers ?

Occasionally, some users sent feedback about how the text from the app wasn’t totally legible in their devices. We dug into that.

After checking Material Design’s Accessibility recommendations about color and contrast, we discovered that our application wasn’t following the standard Web Content Accessibility Guidelines about text legibility.

Consequently, we adapted all themes in the app (light, dark and black) to use the recommended contrast ratios for better legibility. In TimeTune 2.6.1, the text should be more legible in all screens.

Apart from those main changes, we added other minor improvements:

All in all, a very solid update 💪

We hope you like the new changes. If you have additional feedback or suggestions, just let us know 😃